After a monumental tussle of some 6-7 months  --  actually, work, CAP, intervening projects, and the like -- I finally finished the New England NEScaf[e] filter. I will be writing some of my thoughts and comments on the building and debugging process but any negative remarks I make  should not be construed as a deprecation of the fine folks over at NE QRP. Rather, this little project lingered on because of stupidity and inattention. Here are some interior pictures of the completed project with appropriate commentary. 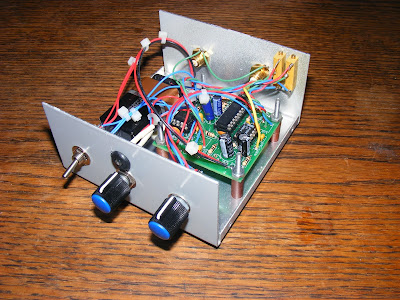 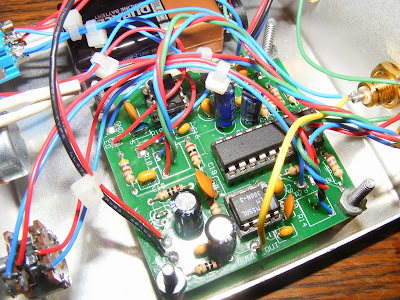 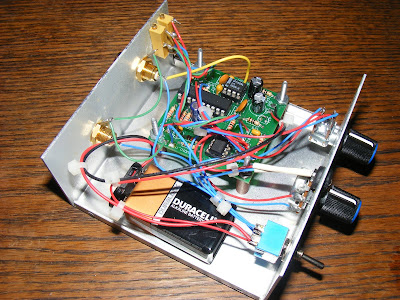 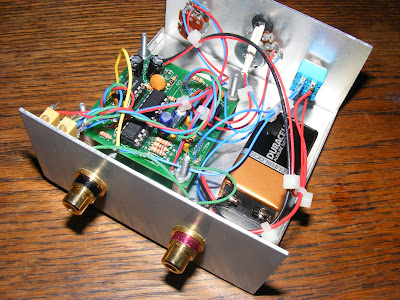 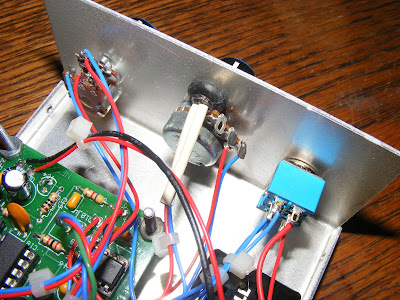 Bottom line is that this is a very decent and reasonably priced product (about $35 to get to your door) and NE QRP has offered this for around 10 years. This is not their day job and I must imagine you would blow someone off if they came back after almost a decade. To NE QRP's credit, they did not. While their web site and forum links may be decaying a tad, they nonetheless did respond and even shipped me a replacement SCAF chip free gratis.

Compared to the dreadful inattention I experienced at the hands of the Idiot Press folks, this was all sweetness and light. Would I  order and build another one? To quote Leon Spinks, "Abba-lutely!"

NOTE FROM THE FUTURE: With the greatest respect to the Swedish gentleman who firsty proposed and did this to his Schlumberger, this mod sucks. I restored this beautiful instrument to its original condition and moved on. Everything is so-o-o-o much happier in my world now. Also, I am over the VTVM jones at this point, retraining two of the four or five that I had. I believe it to be this and a fully-restored, pristine V-7A that adorns my bench.

Not all of the VTVMs I stumbled onto were dogs or fraught with problems. In fact, I should have quit winners. My friend Lloyd said he had a Heath-Schlumberger SM-20 he wanted to part with and I picked it up from him for $15. it was a little dinged on the outside (what sixties vintage meter isn't) but a little TLC and a nick of paint brought it back to its former glory.(Heath-Schlumberger was the commercial side of Heathkit and these were usually the pre- or commercially-built kits that you found at trade schools, etc. This one had those stenciled markings on the case before it was repainted.

Turned out to be reasonably accurate also -- after I exorcised the demons with some contact cleaner and a few joint re-melts.

Like a lot of Heathkits and VTVMs of that era, it had that single stereo phone jack for its test leads. In this case, the probe served a dual purpose (see schematic snippet below) and was switchable between AC Volts+Ohms to DC Volts. Of course, the probes and leads have gone by the boards and it will require some art to reconstruct them. Heath buried a 1-megohm resistor in the probe to isolate it from DC pickup. (I am still trying to get my head around that one.) 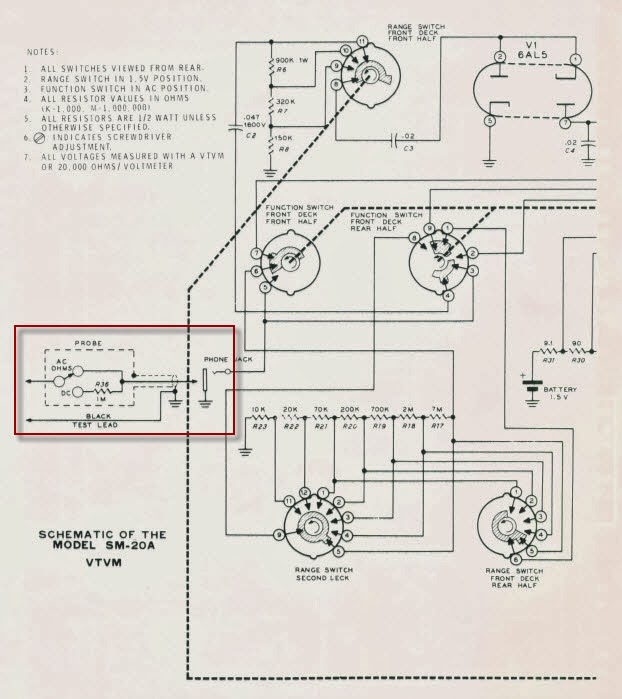 In any event, since there were no probes, I regrettably did some cosmetic surgery on the box and made it usable with standard banana jack leads. I got the idea from a very nice Swedish ham, Hans Gatu, who has quite a collection of Heathkits and tends to make this mod on all of his older VTVMs.

Hans wrote me and explained that he found not a lot of problems putting the extra 1-megohm resistor inside the unit and it was a decent trade-off for being able to use conventional cables and test leads. As my pictures show, I mimicked Hans quite closely. 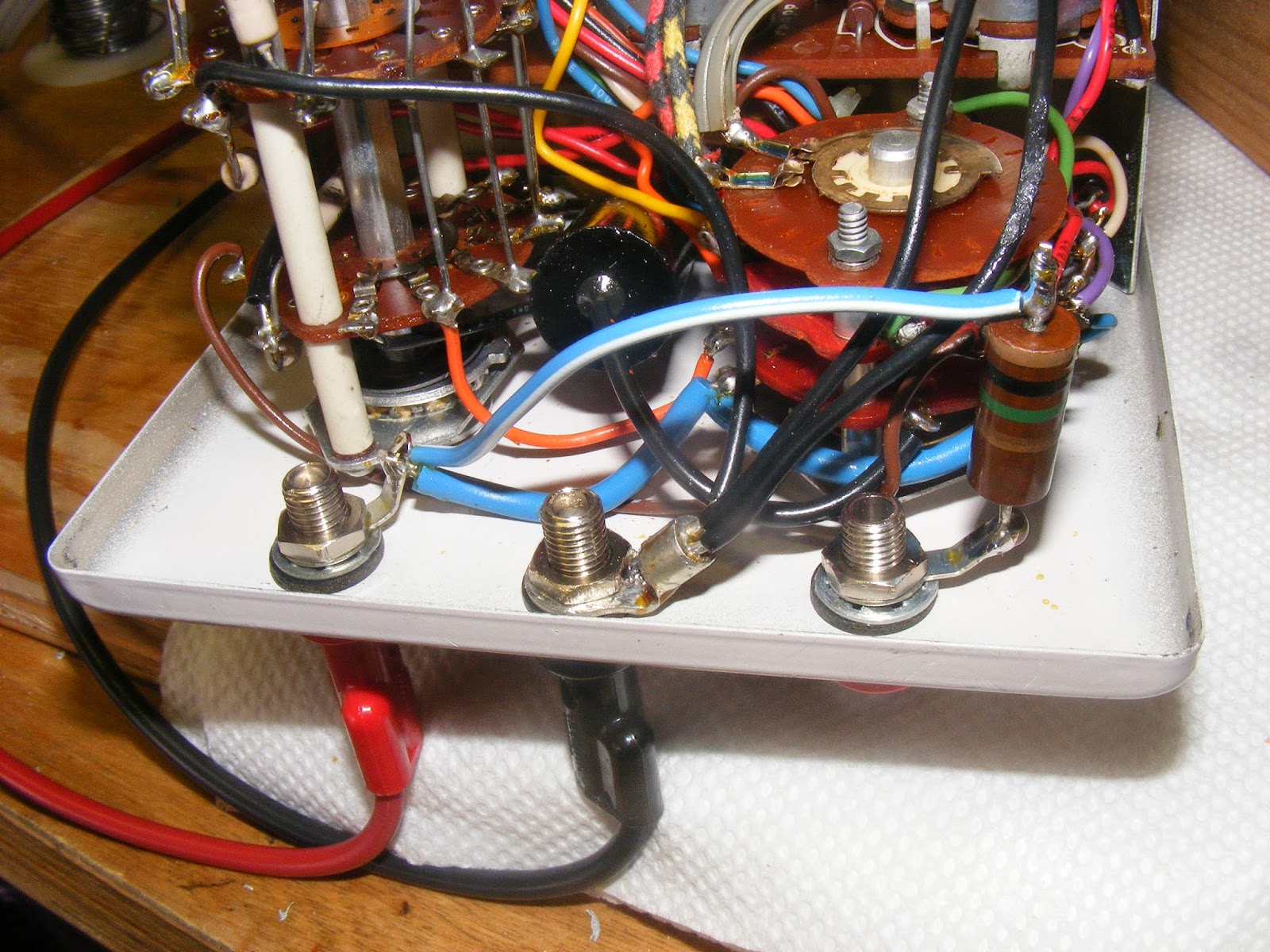 Here is the SM-20 before the surgery and below it is the unit afterwards. 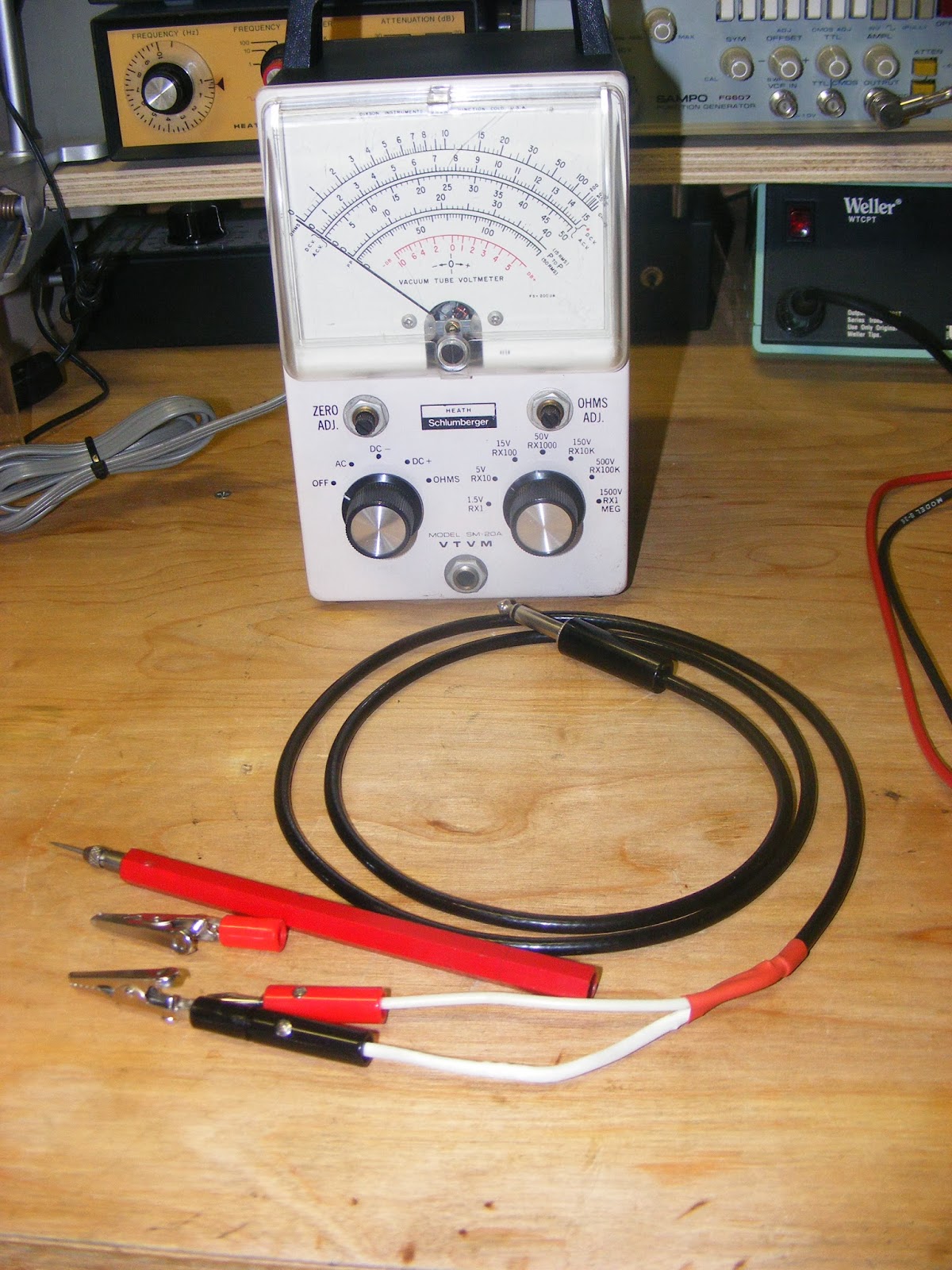 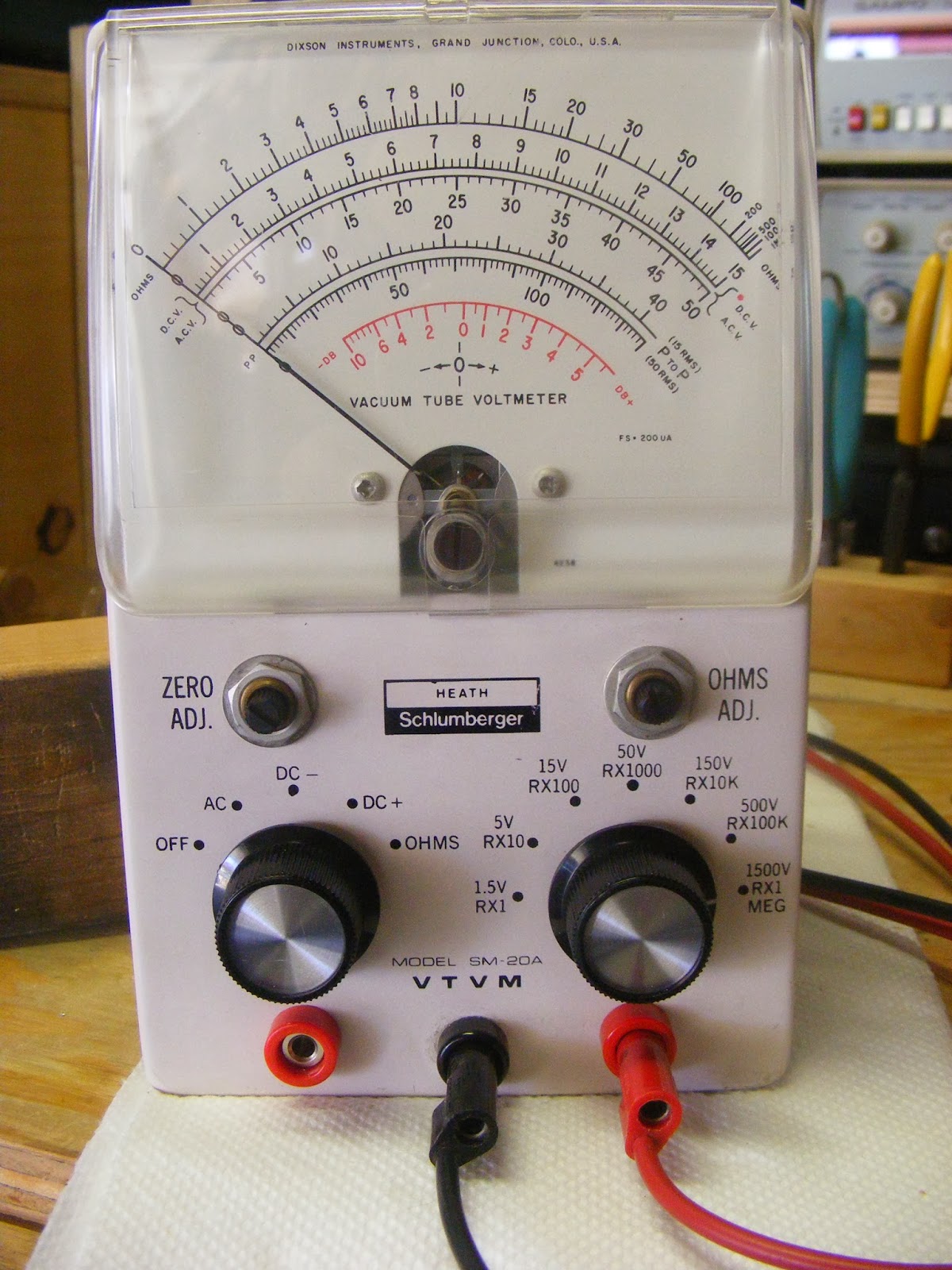 Below -- before the operation -- I was doing a little checkout.

There seems to be a little difficulty with the AC voltage measurements so I think the DC blocking capacitor is needing replacement.