For my personal reference..

I inherited (for a pile of greenbacks) a really mint Tek 485 and wanted to check it out so I came up with these videos courtesy of this really nice guy (who sounds eerily like Gomer Pyle).


He does a pretty job of explaining and demoing this feature. I post it here as a convenience for myself. There's also this video on how to check one of these beasts: 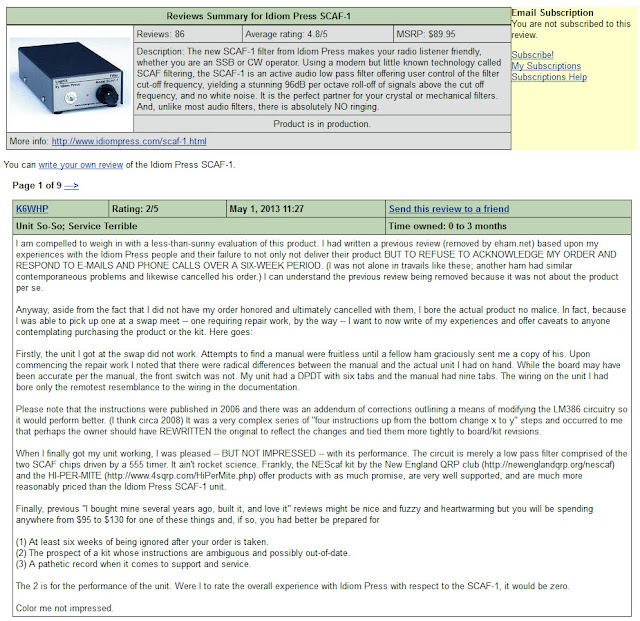 Well folks, I was forced to capitulate. The guy at Idiom Press still yet again continues to ignore my pleas for information. I was lucky to have scooped up one from my good friend and mentor, Dick, WB6JDH, and "opportunities abound". (See below.)

But to close off this little chapter of my own fresh hell, I cancelled my order with Idiom Press and told them that I was not going to be joining their fan club anytime soon. Closing the loop, I published the following review on eHam.net:


I am compelled to weigh in with a less-than-sunny evaluation of this product. I had written a previous review (removed by eham.net) based upon my experiences with the Idiom Press people and their failure to not only not deliver their product BUT TO REFUSE TO ACKNOWLEDGE MY ORDER AND RESPOND TO E-MAILS AND PHONE CALLS OVER A SIX-WEEK PERIOD. (I was not alone in travails like these; another ham had similar contemporaneous problems and likewise cancelled his order.) I can understand the previous review being removed because it was not about the product per se.

Anyway, aside from the fact that I did not have my order honored and ultimately cancelled with them, I bore the actual product no malice. In fact, because I was able to pick up one at a swap meet -- one requiring repair work, by the way -- I want to now write of my experiences and offer caveats to anyone contemplating purchasing the product or the kit. Here goes:

Firstly, the unit I got at the swap did not work. Attempts to find a manual were fruitless until a fellow ham graciously sent me a copy of his. Upon commencing the repair work I noted that there were radical differences between the manual and the actual unit I had on hand. While the board may have been accurate per the manual, the front switch was not. My unit had a DPDT with six tabs and the manual had nine tabs. The wiring on the unit I had bore only the remotest resemblance to the wiring in the documentation.

Please note that the instructions were published in 2006 and there was an addendum of corrections outlining a means of modifying the LM386 circuitry so it would perform better. (I think circa 2008) It was a very complex series of "four instructions up from the bottom change x to y" steps and occurred to me that perhaps the owner should have REWRITTEN the original to reflect the changes and tied them more tightly to board/kit revisions.

When I finally got my unit working, I was pleased -- BUT ONLY MILDLY IMPRESSED -- with its performance. The circuit is merely a low pass filter comprised of the two SCAF chips driven by a 555 timer. It ain't rocket science. Frankly, the NEScaf kit by the New England QRP club (http://newenglandqrp.org/nescaf) and the HI-PER-MITE (http://www.4sqrp.com/HiPerMite.php) offer products with as much promise, are very well supported, and are much more reasonably priced than the Idiom Press SCAF-1 unit.

Finally, previous "I bought mine several years ago, built it, and love it" reviews might be nice and fuzzy and heartwarming but you will be spending anywhere from $95 to $130 for one of these things and, if so, you had better be prepared for

(1) At least six weeks of being ignored after your order is taken.
(2) The prospect of a kit whose instructions are ambiguous and possibly out-of-date.
(3) A pathetic record when it comes to support and service.

The 2 is for the performance of the unit. Were I to rate the overall experience with Idiom Press with respect to the SCAF-1, it would be zero.


The Adventure Continues
That said, Dick's unit -- that he graciously sold to me and that was working when he did so -- went South when I began to operate it around the shack. It performed (as I said in the review) adequately but I was not screaming and the Earth did not move for me. I would rate it a so-so and look more eagerly to buttoning up my Hi-Per-Mite and NeSCAFe filters since they are documented better and seem to perform AS WELL AS the SCAF-1. Actually, truth be told, I am casting about for a really, really sexy container for the Ramsey AF-1 -- it performs very well but cries out for a better looking home.

Though my "Filter Days" are coming to an end (I have learned a lot and have several units that will make the various receivers sound good), I will get Dick's SCAF-1 working (with Dick's help of course) since there are the following unexplainable anomalies:

(2) The unit does not work (i.e., complete silence) when powered by 12.5 VDC and switched on. See above regarding hot Zeners.

(3) The unit will not work with the right rear PCB mounting screw put in place and tightened down. It's intermittent. Again, see #1 and #2 above. This also happens when the box lid is mounted.

Now, I have no Earthly idea why all of this happens (which is why I am going to WB6JDH's QTH Saturday) but, when I find WB6JDH finds out, I will write it down here.

Breaking News!
I have discovered why the Zeners heat up and it'll surprise you. It is a fundamentally BAD DESIGN. I write the following to Joe, K3JLS, and let it serve as a warning to you if you are contemplating the purchase of one of these units:

Just a word to let you know that there is a potentially serious bug (thank you for the schematic and manual) on the SCAF-1. It will not affect 99% of the people who use it, but it bit me in the fanny.

As you know there are two grounds in the unit. One is the power supply common ground and the other is the "artificial ground" in the circuit to derive the +5 VDC and -5VDC voltages for the chips. Turns out, if you have a common power supply for your SCAF-1 and your HF rig, then the two grounds on the SCAF-1 touch pee-pees and cause the voltages to get all hosed up and the Zeners to get hotter than blazes.

First noticed it when I was researching why the board seemed to have "microphonics" when I buttoned up the board and put on the cover. At the risk of boring you to distraction, I kept the cover off when I was testing it in the station and noticed every time I plugged in the station PS,that the unit stopped working and the Zeners began to sizzle. I then powered it with a separate gel cell and everything worked fine.

Also, my unit was one built by one of my SK friends and it had 4-40 screws from the chassis to the board which -- after a little abrasion -- shorted the two grounds together. So I replaced them with nylon screws to avoid any problems.

Probably obsessing over this, but would not feel right if I did not inform you. Oh, and I am NOT a EE but I got a friend who is [one and is the smartest ham I know when it comes to fixing things: WB6JDH] and he confirms [my analysis].

So, the bottom line is that common ground problem exists for anyone who buys the SCAF-1. Also, here's a tidbit: the SCAF-1 circuit was ripped off a 1995 QST article (reference upon request) that has a Far circuit board made for it. I was gonna get that but, now that I know the dual-ground problem, I think I'll live with my other swap meet treasure -- the Ramsey AF-1 -- and that should be fine. Besides, can you imagine a company propagating a circuit error like that? (But it does beg the question as to why this problem has not been discovered before.)

Besides, I have to build the upscale version of Lou's noise bridge.

..so many kits/projects, so little time.