Gentlemen, start your engines..the OHR 500 is about to begin!


The venerable Oak Hills Research OHR-500; a five-band, QRP rig, senior member of the OHR stable of which came many noble kits. OHR was founded by the late, great Doug DeMaw, W1FB, and later passed into the hands of Dick Witzke, KE8KL, and lately Marshall Emm, N1FN. I know Doug by his exalted reputation the latter two gentlemen by their stewardship of OHR and from phone pleasant conversations in search of information re ailing kits.

I want to say this at the outset: just as these gentlemen are fine stewards of the QRP tradition, so are the products they represent. I have, in order, the following OHR products:

o An OHR 100A for 40 meters sold to a ham in Nebraska.
o A DD-1 frequency display for the above that also went to Nebraska.
o A WM-2 that still resides on my bench and is used as a standard.
o An OHR-500 built ans, sadly, sold off.
o An OHR 100A for 30 meters given as a gift from K6BNC. (Still here.)
o A DD-1 obtained at a swap meet and mate to the 30m OHR-100A.
o The OHR-500 purchased through an eBay deal and subject of this writeup.
o Another DD-1 from a WB6JDH clearance sale.
o An OHR SCAF filter also picked up from the WB6JDH clearance sale.

As stated, I built one of these OHR-500s a long time ago and, when it was done, I fired it up and tuned across the band(s). Hearing nothing -- almost NO noise and only CW traffic -- I thought it was was numb. Of course, this was during the time I was building a lot of QRP kits that were peppered with NE602s and whose interiors were alive with the sound of phase noise and digital hash. It was also before the time when I did not understand nor test for receiver sensitivity. I would build 'em and put them on the air and let the chips fall where they may.

Also, about that time, I developed a love affair with the Elecraft K2 and realized that budgetary limitations would not tolerate owning and operating both. So, my OHR-500 went on the market and was sold with a nagging feeling of regret. As I become more knowledgeable, I wished I had kept it and, only now, was able to correct that mistake.

Here are some pics of the beast: 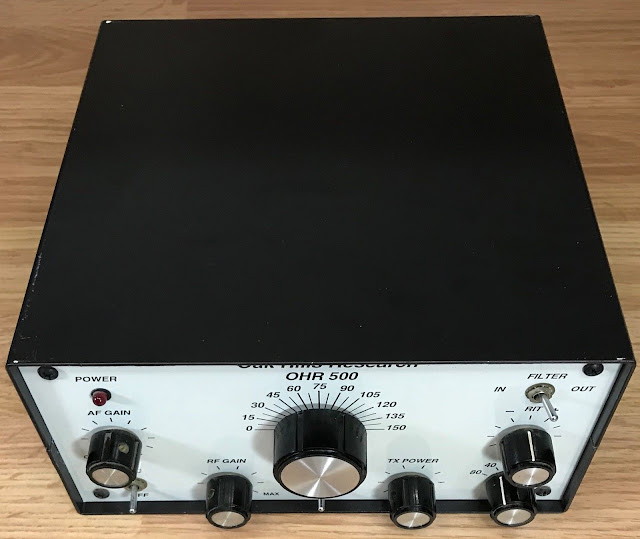 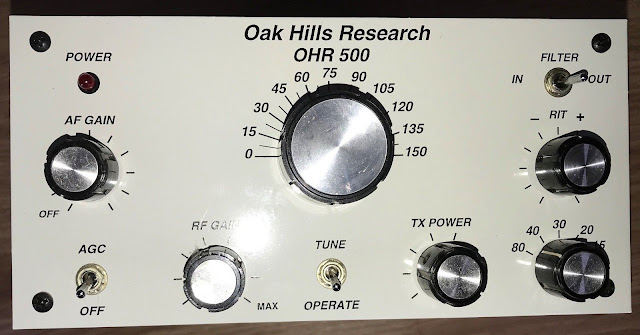 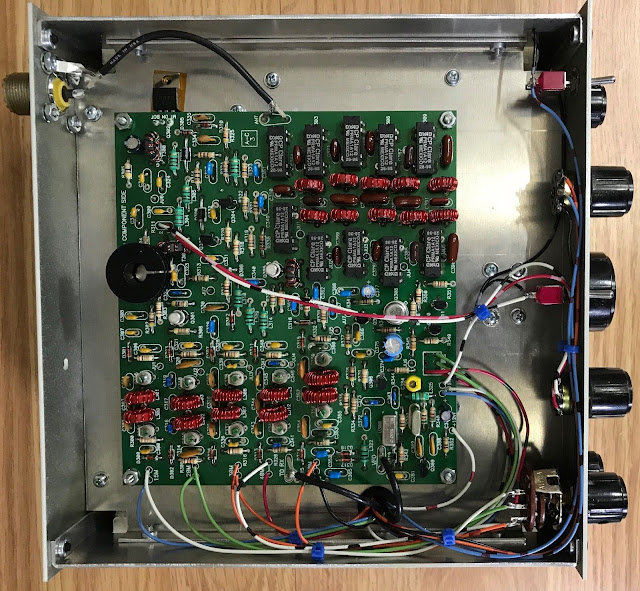 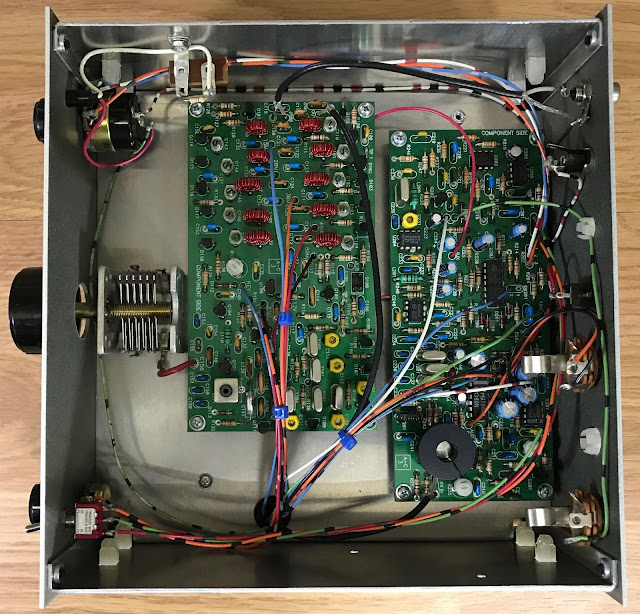 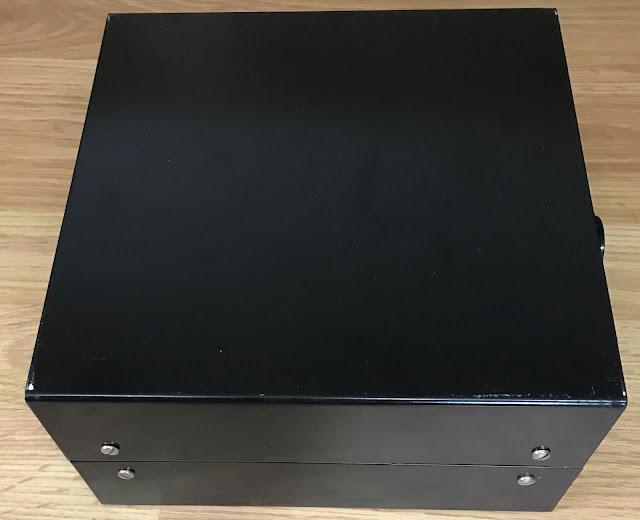 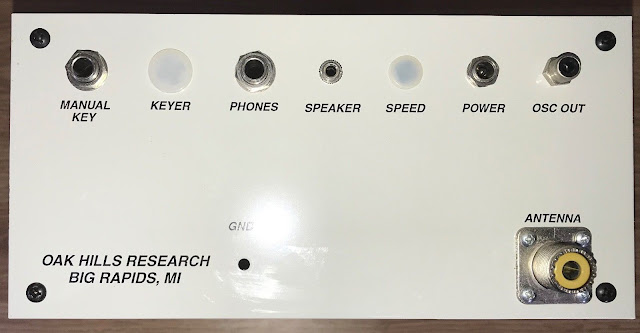 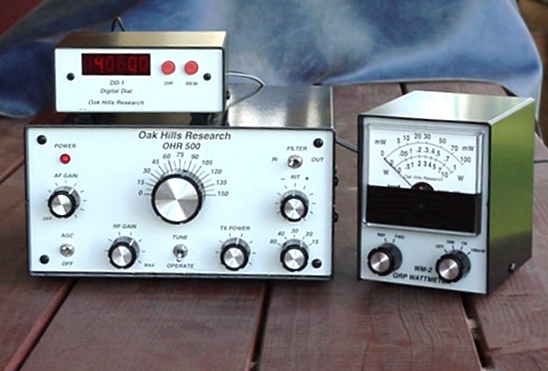 The radio arrived and it was immaculate with only two flaws: (1) the dial pointer was missing and (2) it did not work. But, with WB6JDH's gracious assistance, the unit was resurrected and put on firm footing. During this process it became apparent that the kit was built but never put on the air. Basically, we assumed this because the builder was immaculate and precise in his construction and there was no indication of the "golden screwdriver" ever being used on the radio. You know, no rework, mods or the like, etc.

We found that a couple of switches were wired backwards and there was a solder bridge on the underside of the receiver board (see below) that caused the side tone to be a no-op and would have precluded operation. I am guessing that the guy went through the whole process and, when completed and not working, put it away on the shelf figuring he would get to it another day. He probably then and lost interest and later sold it off.


It tuned up nicely and yields a peak of 7-10 watts on 80 through 20 meters and a diminished (but within spec) 3 watts on 15 meters. The filter is adequate but not as nifty as the variable filters on the OHR-100As. However, like he other OHRs, it offers a rock-solid stable VFO and good, sound ordinary workmanship with no glamor; just functionality. I always did like the fact that OHR radios had an abundance power to burn and you did not have to squeeze the bejeezus out of some overworked final transistor just to get it up to five watts. I would rather throttle a radio back than firewall it.

Happy to welcome it into my home and look forward to putting it on the air. The one thing I dread is programming up the companion DD-1 I got from Dick. Never could figure those instructions out!
Posted by k6whp at 4/04/2018 11:31:00 AM No comments: