A Man with two Watches..


A man with one wristwatch knows what time it is; a man with two watches is never quite sure.

I use my scope a Tek 7704A ("Old Betsy") from the 70s and my OHR WM-2 watt meter alternately whichever one is most convenient when I am building and testing radios. 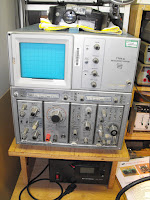 A couple of points here: I am a dilettante and not a wizard like my friend Dick, WB6JDH, who knows everything and can solve any problem you throw at him. (And, believe me, I have thrown a lot of problems at Dick!) Also, I have old-timey test gear that is wa-a-a-a-y complex -- like my 7704A -- and I don't know how to push the envelope on it but I try to learn. That's the fun part of ham radio. 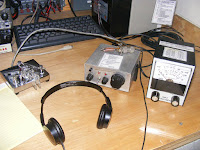 But, some time last year during a spate of building some kits and other projects, I noticed that the WM-2 did not agree with the Tek scope. It got to be annoying so the OHR calibration process was revisited -- but it did not obviate the discrepancy. Some time ago, Marshall Emm, N1FN (SK), and I communicated on the WM-2 re calibration and he assured me that -- in essence -- whatever gets you through the night works just fine for calibration. Obviously, the beauty of the WM-2 was that one could build a reasonably accurate QRP watt meter and calibrate it by looping DC voltage levels through the meter circuit and at each level for the three scales, setting the meter to full scale ensured an accurate RF reading. Marshall's email assured me that using a scope to calibrate the WM-2 was preferable. And that brings me to the nut of the story: how accurate is the stuff on my bench?

The WM-2 watt meter is one of the best little watt meters going because (1) it's a kit and you can build it and (2) it's reasonably accurate and (3) it covers the 0-100 mW range. The downside is that it is a little expensive (around $150) and it is not that accurate.

My Bird wattmeter (a gift from my late father) was the purported gold standard in my younger days and I relied on that.

And I have one or two Diamond SX-200 (and other models) and find them to be surprisingly accurate. But how do I know this? Well, I checked it against "Old Betsy". In fact, I have checked them all against the Tek scope and calibrated them (when I can). I am not a metrician nor do I make any pretense at achieving a heavenly degree of accuracy, but a calibrated scope will get you "close enough for government work". There's a great web page on the subject by Adam Farson, AB4OJ, that can be found here. It begins as follows: 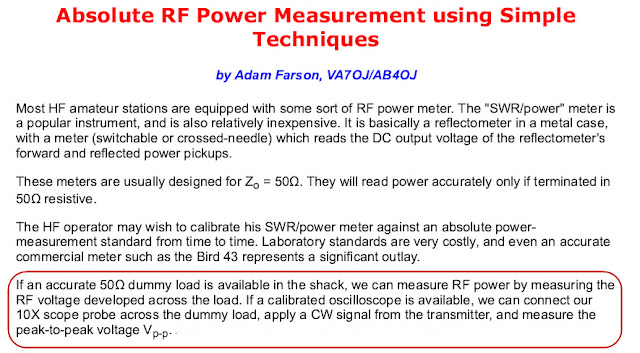 Adam goes into how a scope can be used to measure RF power from the peak-to-peak voltage (Vpp) of a signal displayed on an oscilloscope and his calculation of power from Vpp borders on a derivation so I will confine the formula I discovered in one of Wayne Burdick's Wilderness Radio creations -- I think it was the Sierra. Wayne says, simply:

The last four were obtained by means of feeding the 0.5 watt output into an attenuator and knocking the signal down to levels that allow the WM-2 to be "spot checked" on the 100 mW range. Note that none are close to the actual scale markings so they have to be "eyeballed". (This is, in fact, true of the 10 watt and 1 watt range as well.) However, an eyeball approximation was far better than the inaccuracy the WM-2 displayed by using the voltage/test loop method. Here's the attenuator setup: 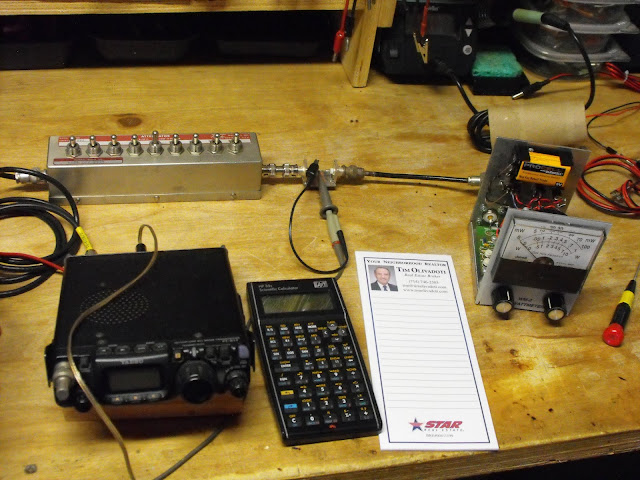 I happened to score that Telonic attenuator at a swap meet for $10 and it is immaculate as well as dead balls on. But you have to be careful with the power input as more than a watt will probably fry the unit.

Incidentally, much earlier on I discovered the dirty little secret that the Bird watt meter slugs can become notoriously inaccurate and are not to be trusted. When it was discovered that my HF 50 watt and 100 watt slugs were all over the map, I followed the procedures outlined in several videos of which WB9FOL's is typical.

I pried open my two slugs and found that the pot had wandered off value bit but could be adjusted and I did so scaling them against the scope for lower power values. It was then that I noticed that the Diamond SX-200s were surprisingly accurate at low power and I used them to scale the two bird slugs up to the 100 watt level on my IC-706MKIIg and IC-7200 rigs.

There are, of course, methods to "reduce" or divide higher levels of power so they can be measured by a scope. These are merely extensions of the attenuator in the scope and the 10:1 probe but huskier. In fact, AB4OJ includes the principles for one in his write-up:

But, by reputation and use, the SX-200 and similar models are very accurate ballpark references. (I know, I know..) The scaling is as good as the WM-2 and these will handle up to 200 watts.
..as I said, close enough for government work.

Post Script: Here is a handy Vpp to Power conversion chart for 2 Vpp intervals up to power in watts. 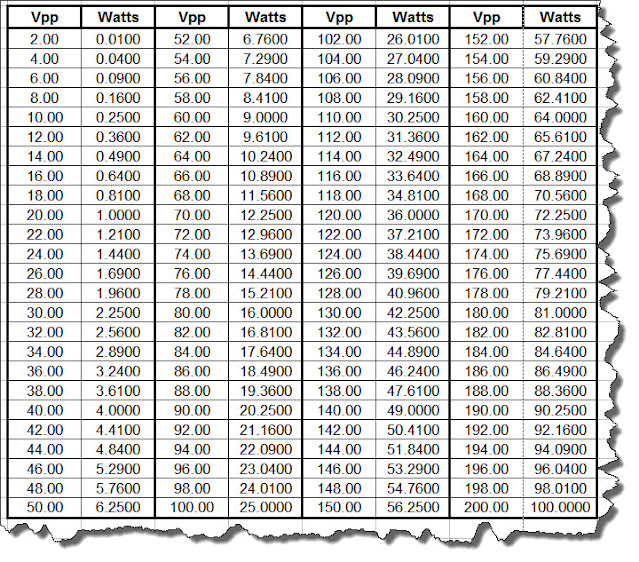 I was wrapped up over the last couple of weeks with how to occupy myself during the house arrest that Governor Hair Gel (the stupidest Democrat in California) and the Los Angeles County Crypt Keeper - "Dr" Barbara Ferrer - has imposed on California and Los Angeles.

Yeah, I know I don't live in that Dem shit hole that is Los Angeles (thank you, God!) and I am not in Hell -- but I can stand on my tippy toes and see it from my QTH. But enough of politics (sort of). Because the COVID-19 farce has conspired to cause virtually every aspect of our lives to be cancelled, we members of the Zuni Loop MEF group have decided to not trek to the mountains and do Field Day. Actually, Field Day will not be the get-together it always is as alternate plans are being concocted to accommodate social distancing and the like. (I just hate that term but understand it's necessity.)

Anyway, I prattle. I decided to resume kit building and reached into my stockroom to pick a thing or two out of my inventory.


Long story short, I built two 30 meter kits: one of Diz's Kits and Parts 5-Watter and the remaining Midway ME-30+ I got several weeks ago. Both went smoothly at first but the road had some "bumps" and I had to iron out some tools and techniques. I will write up one of the "bumps" here and will write up the other "bump" and the 5-Watter build in a subsequent post.

Let's cover the Midway ME-30+ kit first. I won't do the full review because, let's face it, it is basically identical to the ME-80+ kit in assembly and materials except for the band differences and it went together quite well. I still love these little radios and -- years on from my original cruise through Dave Benson's kits -- I now understand the circuit and marvel how neat it really is. The VFO is rock stable and the receiver is incredibly sensitive. Both the ME-80+ and ME-30+ hear down to -130 dBm.

However, in completing the ME-30+ and being generally happy with the build, I was somewhat apprehensive because the most that could be coaxed out of it was just a smidge over a half a watt. Going back over the rig, I noted that I had populated the BPF middle cap with a 68 pF value instead of a 680 pF cap. (That is, "680" does NOT mean 680 pF, it means 68 pF.)

Live and [re]learn, I guess. That got me up to just over 1 watt. So as I was trouble shooting this, I started a letter to to the Midway Express owner, Rick Choy, about this matter:

Sorry to intrude on your Memorial Day holiday -- and this need only be addressed in your convenience -- but I have some questions re your 30m kit I just recently finished, to wit, is it performing to spec? I believe it is; just wanted to confirm. Here are the facts:

(1) Basically, there were no problems with the build/checkout but I could only manage to get just over 1 watt out of it when done.

(2) Went back through and checked ALL components and found none misplaced nor any solder bridges, bad joints, etc.

(3) I checked most of the voltages versus the schematic -- specifically the XMIT chain -- and they were 100 percent.

(4) I checked the signal levels and the appeared normal.

(5) Specifically, I checked the signal at the base of Q6 and found that to be approx 2.5 Vpp.

I wanted to see if this is normal because the ME-80+ I built had an output of more than 2 watts. Of course, that was 80m and this is 30m. Also, I have no heartburn about this because I will throttle this little radio back to 990 mW so I can work QRPp. Just checking. Screen shots below.


But, after I got to thinking about this, I realized I could do a comparison of the ME-80+ and the ME-30+ and see what's what. So the letter was not sent. Basically, what came up was the ME-30+ was not losing a lot into the BPF -- at least not as much as the ME-80+ was. Here is a comparison table of the results:

So, it appears that the ME-30+ is doing the best it can despite having more drive (2.4 Vpp versus 2.0 Vpp) which probably means that the Q6 in the rig is a little weak. Here are the traces for comparison.


So the bottom line is that these kits are fun to build and operate and they are small and have a "heft" to them so that you won't hesitate to take the radio with you to a local park or mountain top, etc. (Some of the these fragile "pocket" radios feel like they will fold up in a stiff breeze.)