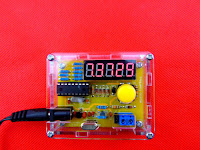 NEWER UPDATE
These are pieces of shit. Basically, the circuit for measuring frequency (not their goddam crystal checker circuit) doesn't work at all. I would not piss on the makers of these piles of fecal matter if they were on fire. As far as I am concerned, they can all die and go to hell with a hard-on.

That is my final word on the matter.

UPDATE
I need to do a retraction of sorts here. While I am still somewhat agitated by the lack of support by the seller of these items, I would like to go on record as saying, once revived, it appears these might actually be quite useful. Let me bring you up to date.

It seems -- after all my poking and prodding -- the second unit "woke up" and began working. Once that was in place it was a simple matter to debug the first unit -- which was truly moribund. Seeking and getting advice from Chuck Adams, K7QO, over on the QRO Tech Yahoo group, I swapped out out the PIC chip, trading the good board's chip for the bad board's chip. The fact that the good board performed correctly no matter which PIC chip was aboard revealed that BOTH chips were fine and dandy. Next, I timidly put the good board's chip into the bad board -- and yet it still slept with the fishes. Remembering back to my earlier debugging effort where checking the crystal operation on pins 15 and 16 revealed a nice clean 20 MHz trace (well, 19.997 MHz, actually) on the good board and bupkis on the other, I thought to swap out the crystal on the bad board. 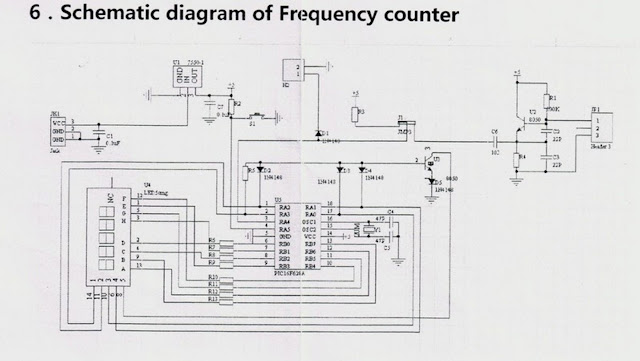 Of course, these little guys are the "low-rider" HC-49/U cases and wicking out the one on the good board and soldering it into the bad board would have been dicey at best. So, reaching into my cavernous junk box, I grabbed a 16 MHz crystal (that I checked out in my PacifiCon crystal checker AND the good board's crystal checker first) and "welded" that in place.

Viola! The bad board awakened and began perking along nicely.

So I am forced to conclude it was a bad crystal all along. It cycled through the menu, saved offsets (more below) and, of course, the results of checked crystals were off by about 4 MHz. But all I had to do was get some ("Get some! Get some! Get some, baby!") new 20 MHz crystals and I'd be set.

I pulled the trigger on a local auction (to hell waiting a fortnight for some guy in a warehouse in China get around to sending me them), and was the proud owner of what I thought was six or seven 20 MHz jobbies. Sadly or happily, the quantity count turned out to be FIFTY!

Remember the 19.997 MHz comment above? Well the good board was off by 3 KHz so it seems as though a the 19.997 MHz may be causing the error. The price was right on the batch that I got, so I can wade through all fifty, find one or two of them dead on, and swap out the old crystals for the new accurate ones.

Another plus of the design is deriving the offset if this is going to be used as a frequency display for a radio. You merely go into menu mode, measure the IF of the radio in question and then press "ADD" or "SUB" to obtain the appropriate offset and call it a day. The VFO frequency will then be ADDed or SUBed to the stored offset and Bob's your uncle. I am guessing that you can also set the IF by using a signal generator. How the hell will the counter know?

Add to the fact that the plastic case looks kind of nice -- much better than saving a few bucks and putting the display in some kludged-together pile of soldered PCB.

So, looks like the rain clouds are parting and the sun is coming out after all.

ORIGINAL POST
O.K., so there's only one in the picture. But I bought two of these units off eBay from a Chinese dealer in the mysterious Orient and it turns out that the only goddam thing that was mysterious about BOTH units was that they did not work when I assembled them.

What a waste of time and money. Oh, they do offer a money back guarantee but one has to go through the effort (and cost) of mailing the crap back to those pirates.

And, yes, I assembled them both carefully. And, yes, because the first one did not work, I MEASURED and TESTED each part I put onto the board of the second one. And, no, neither one worked.

But to be fair, the second one worked for a few minutes and then crapped out. And, when it did work, it blinked and gagged out some mysterious prompts via the display. Pushing the button only brought on more weird behavior and mysterious prompts before it finally faded into oblivion. Of course, I had given the dealer a positive rating when the packages arrived. And, of course. I sent the dealer a message telling him that his piles of Chinese crap sucked. (I was more polite than that. Next message will not be.)

But to my original cause for aggravation over these units: the single piece of toilet paper that the Chinglish instructions were written on. You know, the ones with the microscopic printing and faded, unintelligible diagrams. (I don't expect a damn Heathkit manual, but they could have invested a little more effort in the instructions, fer crissakes!) And as for operating instructions once these are up and running? Non-existent. Not a whisper of a hint of a breath of a word about how to measure frequencies or crystals or set the offsets.

..which is what these are worth.

One Watter: Watt's up?

Just so you don't think my workbench is orderly and immaculate all the time..

I was closing in on the finish and had added the final amp and output bandpass filter (actually completing the build) and was testing/aligning the radio when I hit a bump in the road. Try as I would setting the output power to one watt, I could not goose the little beast over 0.7W out. I peaked the bandpass filter over and over again. I check out the parts, solder joints, etc. but could not budge the output power past that level..

..at least that's what my OHR WM-2 watt meter was telling me. 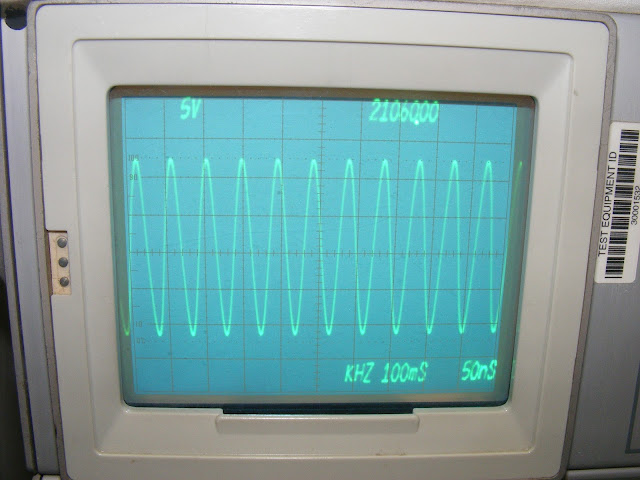 Consulting with my arch-friend, WB6JDH, and doing a little research, I came across a tour de force slide presentation entitled Math for the General Class Radio Operator that N9XH did for the ARRL and those sources cleared a lot up for me. Here are four salient slides from that presentation, right in the wheelhouse with respect to addressing this situation. They are self-explanatory: 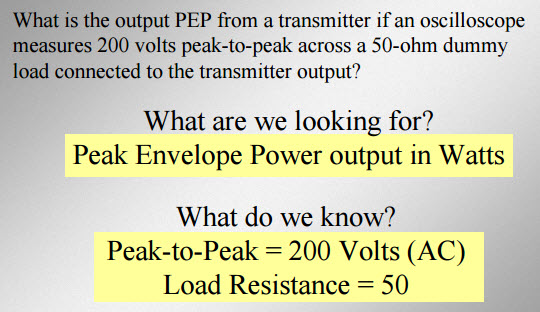 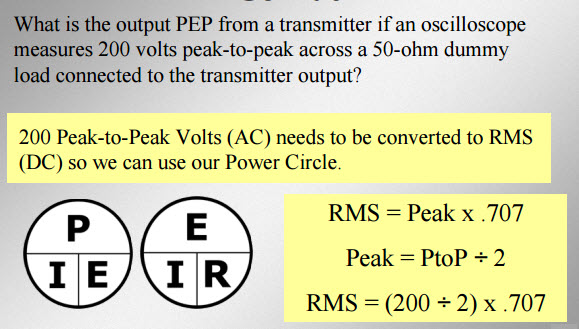 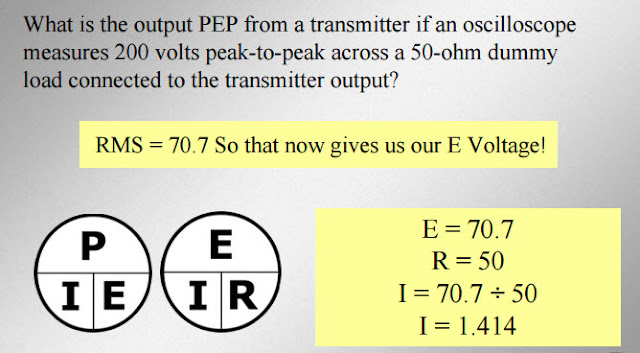 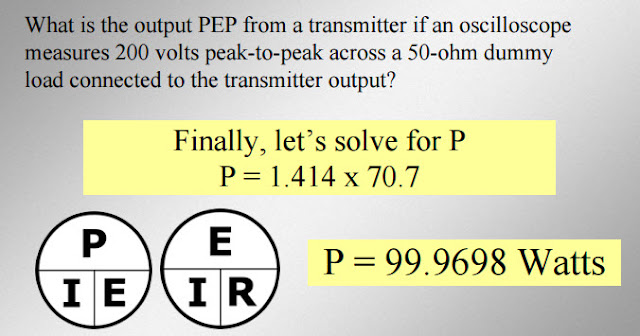 So, extrapolating from the above,

(2) Convert from peak-to-peak to RMS:

But Dick simplified this by using .3535 (half of 0.7070) and skipping the determination of the current and squaring the voltage. I will leave you to derive that, but it works out the same:

Although it is good to know the derivation, I am going with Dick's method as it is shorter and handheld calculator friendly. Anyway, however you run the numbers, it works out to 4 divisions being damned close to 1 watt. (About 0.996 watts, actually.)

Now here's the rub. I went back and re-ran the calibration on my OHR WM-2 and it *still* came out around 0.7 watts when the 1-Watter output was set to 4 divisions (20 volts peak-to-peak) on the scope and I cannot explain away the difference. Trying a couple of other watt meters I had in on the bench, I found a some were "inaccurate", but a Diamond SX-200 was "dead on".

Failing a plausible explanation for the differences and trusting in my scope (a calibrated Tektronix 7704) as being the most accurate source -- AND since my other measurements of various circuit points on my 1-Watter substantially agree with those presented in K7QO's Phase 8 and Phase 9 videos, I deemed that the standard. And, actually, went back to calibrate the OHR WM-2 using the 1-Watter as a reference.

Now, here's an interesting factoid in this which lends to the mystery. About four weeks ago -- sometime around the first part of December 2015 -- wanting to give QRPp (QRP operation at one watt or less) a try, I got out my old NorCal 40A and set it to one watt using the OHR WM-2! Going back and measuring the NorCal 40A with the same WM-2 used to set it to one watt out, I got a similar 0.7 watt output reading. Netiher the WM-2 nor the NorCal 40A was touched in the interim.

Anyway, my final pronouncement on the 15 Meter 1-Watter is that it is a fun kit, very reasonably priced, and with Chuck and Diz's documentation, and excellent source of knowledge for the builder who wants to be much more than an appliance operator or "Baofeng Tech".

I didn't necessarily blast through the middle and ending phases but I did not document them as thoroughly as I should have. (In fact, I did not document the first phases that completely either. Pretty much a bunch of pictures with comments. But then again, I did so for the following reasons:

So here's up to Phase Eight -- the driver stage. Everything up through this stage checked out fine and I was set to sail through the last stage (the final and the output bandpass filter) when I hit a bump which I will describe in a final post. However, the bottom line was that the rig ultimately passed with flying colors and is waiting for a home.

So here's some pictures and comments for the last phases.

The T5 transformer on the 15m 1-Watter is wound on a BN-43-2402 binocular core and is actually pretty simple once one realizes that a complete turn is one pass through BOTH holes. (It is, therefore, possible to do a half turn.) If you follow the instructions re wire size and wind the 8-turn secondary first, it's a piece of cake.

The tricky part is adjusting the pre-driver bandpass filter -- between C23 and C24 but that is only marginally nigglesome to adjust. For the transformers in this stage. Diz recommends an alternative of stripping the entire length of the one-turn secondary for each of these transformers but I opted to use semi-long pieces of bare clipped component leads I had lying around. They were more riggid and saves me the work of tinning, etc.

..on to my final adventure!