SUCK to SARK..the voyage around the SUCK begins..

Preliminary report: the cool thing about the Sark100 (Chinese eBay knockoff I have) is that is a decent signal source. Lo, look upon the emission and be humbled: 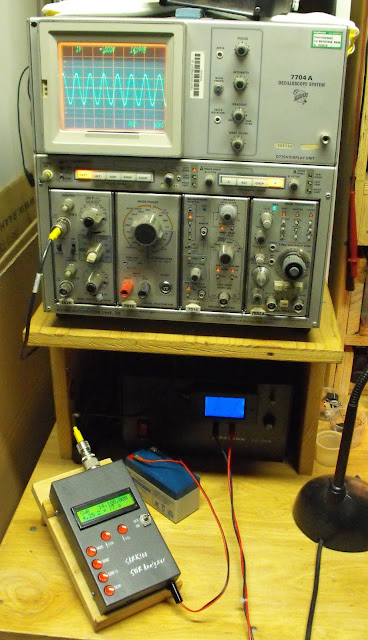 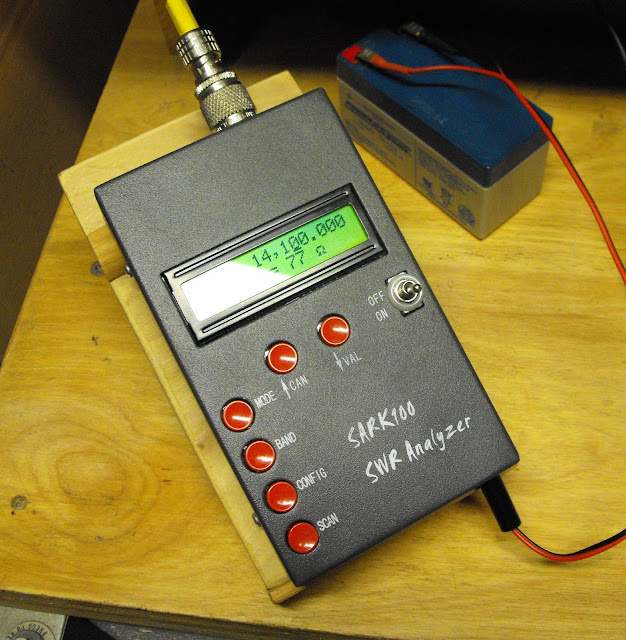 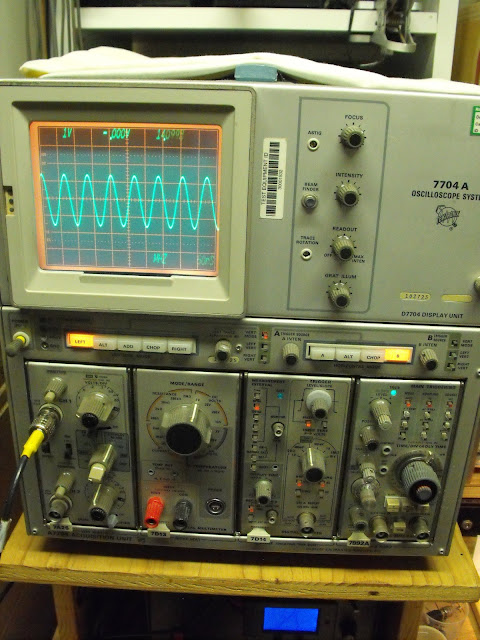 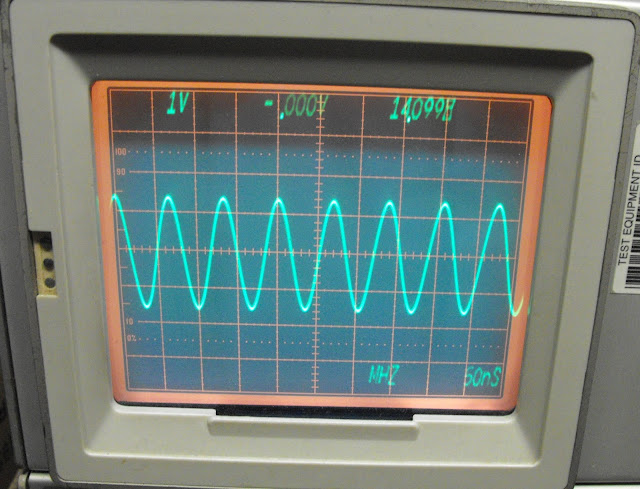 The manual specs claims that it is about 2.0 vols p-p adjustable but, seemingly, no external adjustment exists so I guess that the adjustment is done by means of rewriting the firmware as I cannot recall any internal trimmer extant.

However, while I originally thought that the "bands" were discreet frequency ranges relating to the amateur bands (160m, 80m, 40m, etc.) I note that these are broad contiguous ranges covering roughly 1.0 MHz to 60.0 MHz. Per the manual: 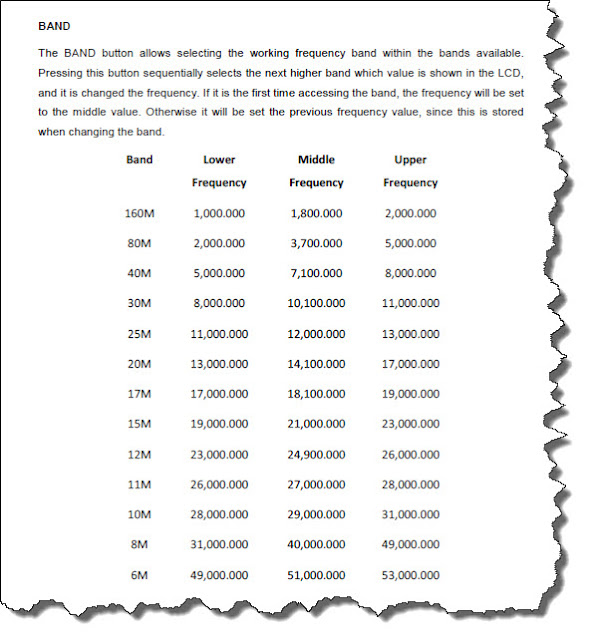 Also, hitting the "CAN" (up arrow) or "VAL" (down arrow) buttons will segue from one band to the next without stopping. It does so by stepping the preset increment per the config parm.

So, basically, it's a fairly decent signal source and reasonably accurate.

Sadly, it seems that the capacitance and inductance measuring capabilities of the device (CAP and IND mode) does not seem to work as described but I have to diddle a little more with that..

Retraction: Suck100 does not suck nearly as bad as I thought..

Boy howdy! I sure got egg all over my face on this one!

Often in my career as a software developer, I would lapse into a childish tantrum and blame everything else on my software's failure and I found one fact to be almost axiomatic: the louder I complained, the more certain it was that the problem was my fault! Below, I unloaded on the Sark 100 antenna analyzer that I brought back from the morgue slab, calling it a worthless piece of shit, in effect, and barely worthy of the money and time I expended. Well, I am here to chow down on a huge plate load of crow.

Like the old aphorism goes: READ THE F**KING MANUAL!

That is, I got hold of one here and, after perusing it, I find that this little unit is the bargain of the year! Firstly, this disclaimer: this applies to the "original" kit which was derived/created by EA4FRB and is archived on this site. 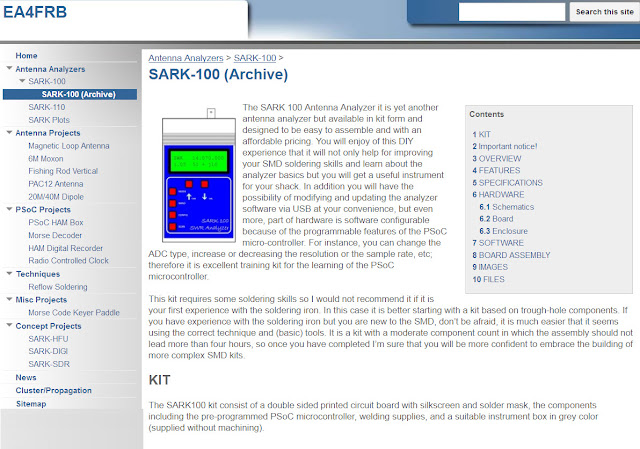 As you will see, the Sark100 was discontinued in 2011 and has been superseded by the SARK-110 which is an ass-kicker of an analyzer with a hefty price tag. You interested? Look it up. This is about the SUCK Sark100. Also, another caveat: this is about the Chinese eBay Sark100 ripoffs so I cannot vouch for that at present. But, based upon what I read in the manual, the little unit is blessed with a lot more features than I originally thought.

For example what follows is a summary of what I found and will confirm in the next few days.

OVERVIEW
The Sark100 SWR Analyzer Kit is a measurement instrument which determines antenna system performance across the HF/6M amateur bands without the need of connecting the transmitter to the antenna. It is ideal for checking the resonance, bandwidth, and SWR in an easy and fast way. The meter also measures the resistance, reactance, and the magnitude of the impedance.

The analyzer is comprised of a single double-sided printer circuit board PCB (145mm x 81mm) containing all components, controls, and a 2x16 LCD display with backlight; all inside an enclosure that allows in-hand use. The enclosure holds an 8-cell AAA battery pack enabling convenient field use.
The analyzer design is based on a DDS signal generator, a PSoC microcontroller, and a reflectometer for the impedance measurements. The features and flexibility of the PSoC microcontroller allows for a simple hardware design. The design provides an USB interface to allow FW updates and uploading of the real-time measurements to the PC. The development environment is the free PSoC Designer tool and the
code has been programmed in 'C' language allowing along the USB update capability the easy customization of the code without the need of acquiring any tool.


..so, it's these last items that intrigue me the most as it appears as though there's a lot more smarts behind the little beast than meets the eye. If those have been carried over to the Chinese eBay knockoffs, then, at $60-70, they are quite the steal. And I rather suspect that, since EA4FRB created this with an eye to open source development, there's a good chance that our Asian merchants have incorporated a lot of the functionality into their offerings.

Will get back to you as more is discovered. But, for the present, I was so stoked to discover this that I ordered the $50 MR100 version now on the market.

Saga of the Suck100 Antenna Analyzer

So here's the deal: Dick came by the yesterday to calibrate his Aussie Antenna Analyzer and check things out. That process was was moderately plain sailing until I pulled out my Sark100 analyzer (hereinafter referred to as the Suck100) and we did some comparisons.

Well, it actually was not the comparisons that was the problem, it was the fact that my analyzer had developed a display problem. Seems that a row of bits in the second in the second line had decided to take a siesta and, on occasion, caused some ambiguity in the SWR and Z readings. Here's what I am talking about: 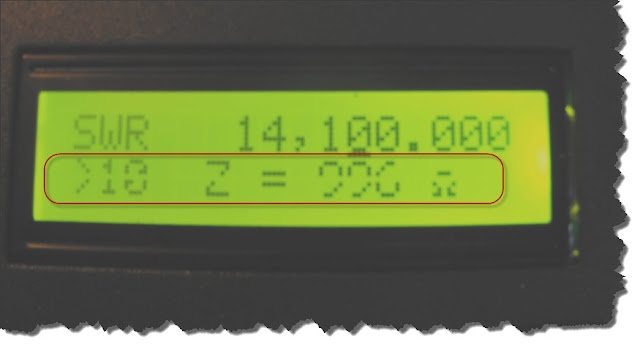 Quick glances at a VSWR of 1.90 might lead you to believe it was 1.00 or something. Anyway, the fact that I paid 80 Simoleans for this piece of shit and the display failed after about two-three months of minimal use and great care in a docile environment. (I was not building or measuring any antenna at McMurdo Sound or in the Sinai Desert.) So, when Dick folded up his operations, our attention turned to the Suck100 and the possibility of fixing the display. And, long story short, we reasoned that possibly one of the two-line displays I had on hand might be a suitable replacement inasmuch as they had the same pinouts and footprint.

After jimmying one in parallel with the existing display and putting power to it, we saw that it did light up and some characters seemed to appear intermittently. Anyway, it was enough for Dick to wick out the old display (he's better at that than I am) and replace it which led to success! We had a unit with both lines intact and robust and, although the backlight was not as brilliant, it was more than adequate. However, another problem arose in that the evil "Error Vf Level" message appeared and subsequent operation of the unit was inconsistent bordering on pathetic. So Dick departed for home and I spent the evening hours thinking and researching.

Luckily, I turned up the assembly manual here (the Sark100 started out life as an EA4FRB kit) and it contained some troubleshooting tips: 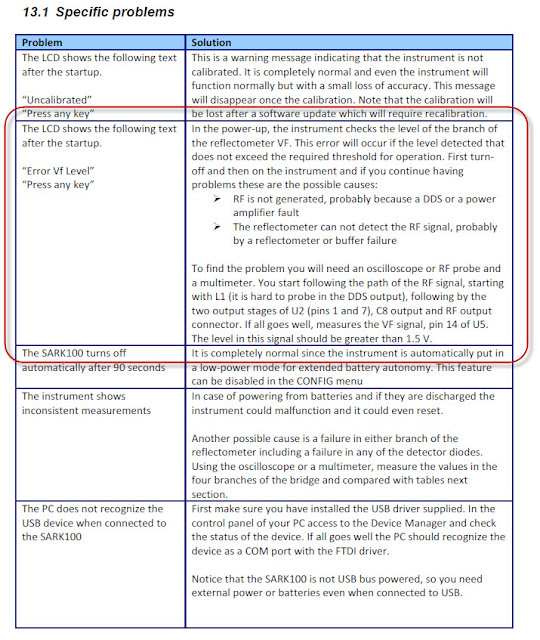 Well, this was at first dismaying because my Suck100 was all SMT and had four or five of those tiny chips. However, pressing further, I discovered the following video which breathed life into the process above:


So, emboldened, I took a lash at tracing the problem and found that the output of U2 -- the AD8008A dual op amp -- was pretty puny and that it would probably have to be replaced. resigned to this, I noted that the chip itself was actually pretty hefty and a second look at the SMT parts proved to not be as scary as I originally thought. Sadly, the AD8008A was not readily available. The only sources were the eBay Chinese vendors with their questionable quality and four-month delivery times or Digikey who wants $3,100 for a boxcar full of these beasts. So I decided to see if the local houses had any of these in the morning.

But, while casting around for a source for the AD8008A, I happened to notice that one of the SMT caps near a display shim nut was empty and looked as though I had excised it when I wrestled the nut off the board. So I got a through-hole replacement, tacked it in place and powered the Suck100 up -- WITH NO VF ERROR MESSAGE! 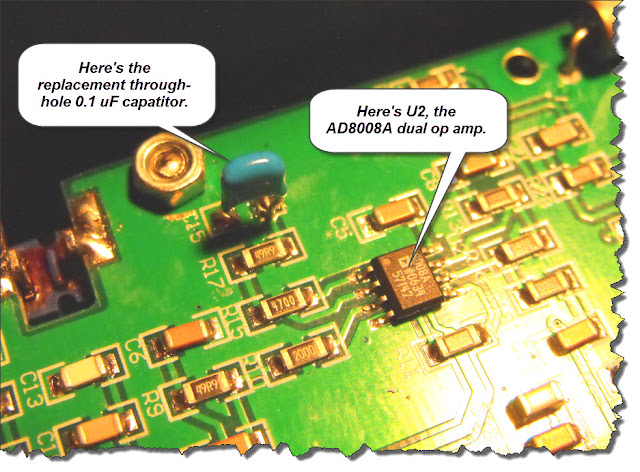 And checking the output of U2, it was restored to the 1.5 Vrms per the procedure above. However, the analyzer still acted a little inconsistent so I subjected it to a re-calibration process (the 50-ohm, 150-ohm, 274-ohm mambo) and all seems to be right with the world!

An additional note: I savaged the crappy ON/OFF switch in the process of extricating the board (to get at the display) and found that one of those small SPST switches fit precisely in the slot on the board and could be tacked into place. (Dick took care of this as he is a wizard at such things but it was pretty easy to do if one is careful.) 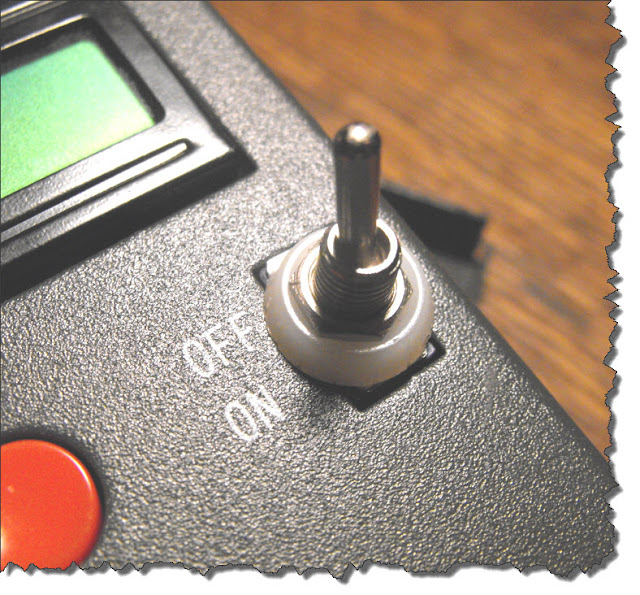