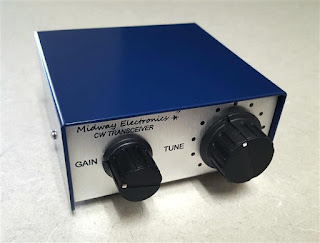 The previous post mentioned Midway Electronics' ME-XX+ kits -- the reincarnation of Dave Benson's mid-1990s SW-XX+ kits -- and how I was looking forward to building them to recapture a misspent youth. Well, as of this writing, I have completed the ME-80+ (80m version) and wanted to offer up some comments and pictures for your perusal.

Firstly, let me say that I ordered the full-blown kit -- board, parts, case, and all the fixins' -- and I do not regret it at all. At first, I thought I would have to replace the 100K Ohm tuning pot with the obligatory 10-turn replacement but the case does not allow it space for it. However, the original pot is of good quality and certainly adequate.

All considred, the Midway guy has done a superb job of offering up a complete radio with some really nice touches.

In addition to the decent case and hardware and knobs, there are some thoughtful "extras" thrown in that make the kit and resultant radio a "keeper". Thoughtfully provided are the header strips and cabling to give the radio that finished look. Also, the snap-in standoffs are pretty easy to install. Although I went with my own standoffs, the ability to extract the board from the case by unfastening the cables and lifting it out makes for easy debugging and repair. I would only add that Dave's original kits did not have an on/off switch and the Midway kits don't either; it was something I always lamented. (As you can see from the pictures below, I added a a switch.)

Diving into the kit is a lot of fun. While, conceptually, it's straight forward to build and the manual is nearly identical to Dave Benson's SWL manuals, it is not part-by-part but rather block by block. (Or, if you will, quadrant by quadrant; see sample below.) 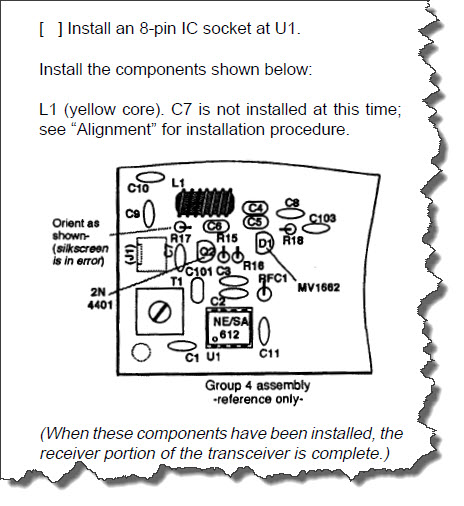 My philosophy regarding kit building is like my old adage: "I burn up more rolls of solder than I do log books." I take it slowly and enjoy it. I mean, after all, it's not like I don't have any radios to operate. At a decent, leisurely pace, it took me four days to build the kit working two hours per night.

The board is superb! In fact, it is better than Dave's boards as I recall. But I would caution you that, if you are not an experienced kit builder, you'd best inventory the parts and organize them so you gain some familiarity. There is nothing worse than stuffing a 47 Ohm resistor into the holes for a 47K Ohm resistor's holes and have to dig out the mistake during the checkout process. Also, read and understand the freaking manual first. There are some tips and caveats in there that add to the fun of getting the build right.

Once assembled, the checkout is very simple and -- quite literally -- can be accomplished with a DMM and your station rig. For example, at power-up, I heard nothing on both receive or transmit and resorted to the voltage schematic provided. I discovered no Vcc present at the two receive SA612 ICs and scattered places around the board. When I examined the traces from the 78L08 voltage regulator output to these ICs I noted that I had installed D2 (a 1N4148 diode) "upside down" and it was a roadblock to the DC rails. This little tidbit was addressed in the manual: 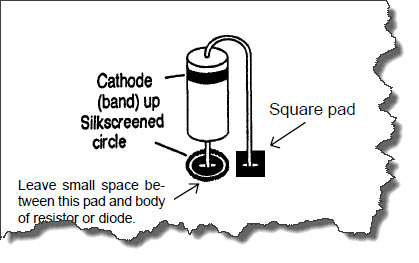 Correcting this (flipping the diode) cleared up 99.99% of the problems.

This next point was not really an error on my part. Dave's design uses three of the old Toko IF transformer cans -- two in the transmitter and one on the receiver. Aligning the radio is a simple matter of tweaking the cans to obtain a peak signal out (transmitter) or a peak signal in (receiver). The transmitter was no problem and I was able to peak the radio at 2.5 watts. (Despite the advisory to throttle the rig back to 1.5 watts, I felt comfortable at having it output 2 watts.)

But, when I attempted to peak the receiver, it was number than a rock. In adjusting the receiver transformer, I noticed that the slug in the can neither moved up nor down and reasoned that the threads had been stripped. The best it could hear was about -70 dB. So, since I had a couple of those Toko transformers on hand (marked "412F123"), I opted to wick out the old one and replace it. This was a tricky job but, once accomplished, the little receiver heard all the way down to an honest -130 dB!

My recommendation is that, when you inventory the parts, check out each transformer by carefully screwing the slug in and out to make sure it travels up and down. If one does not, ask Midway for a replacement. Also, please note that I do NOT lay this at Midway's feet. Their conscientiousness and customer service and kit quality is stupendous! One just slipped through!

The final step is to set the frequency by inserting in an NP0 cap into C7 for the desired range. As it turned out, mine required a 56 pF cap (that actually measured 60 pF) which gave the little radio a range of 3.499-3.537 MHz.

I can live with that! Anyway, here are some pictures: 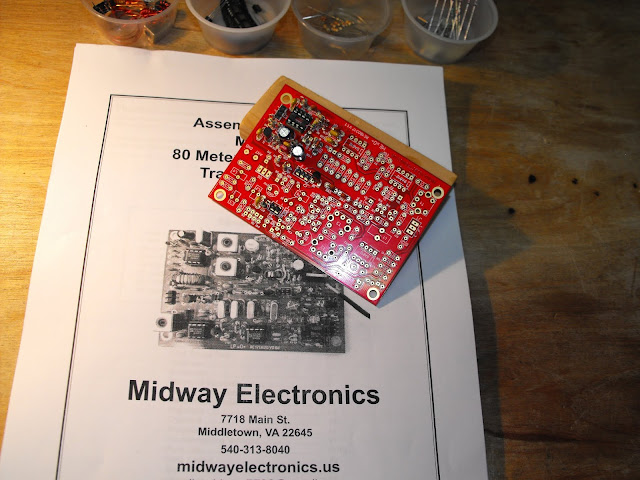 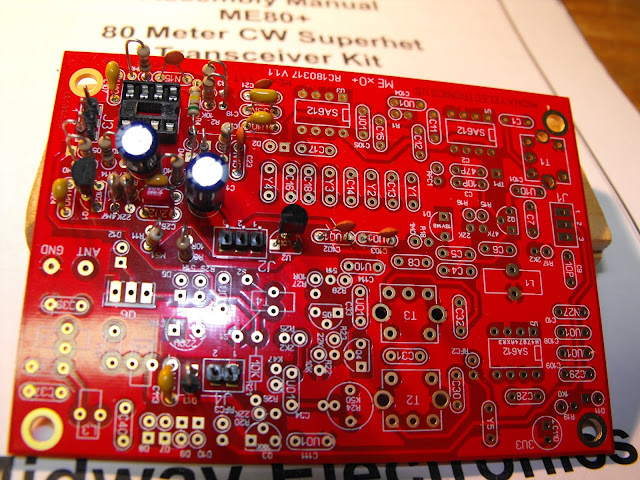 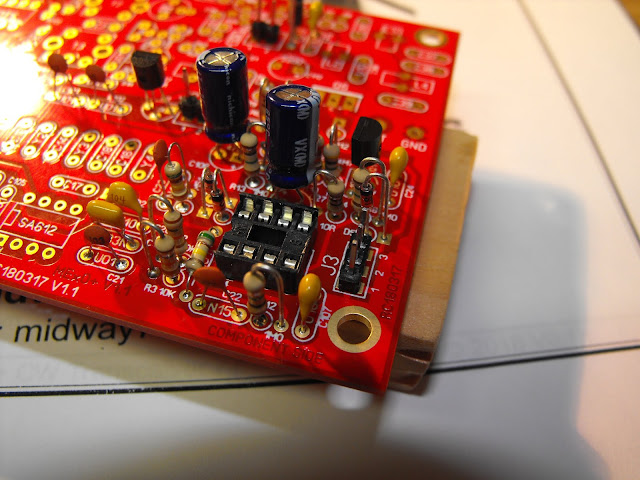 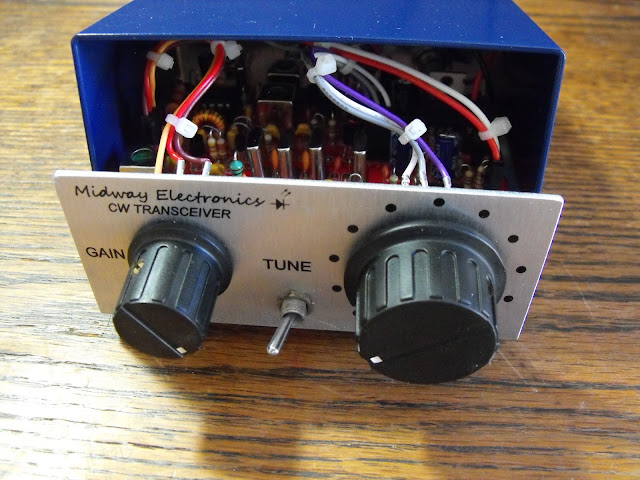 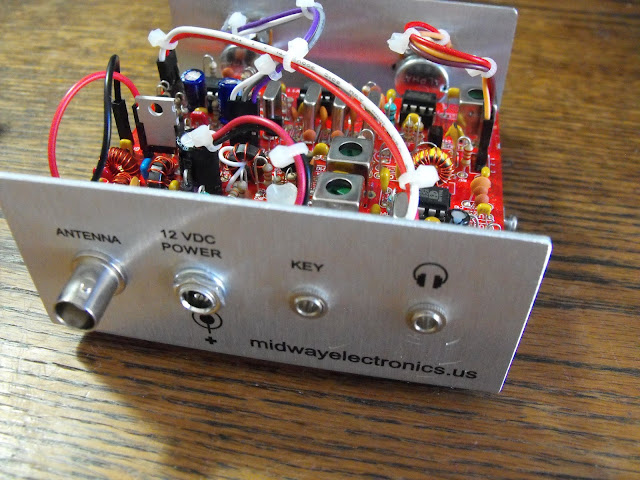 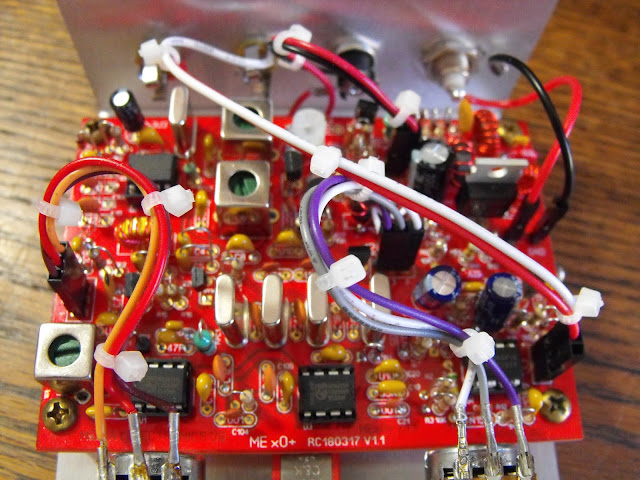 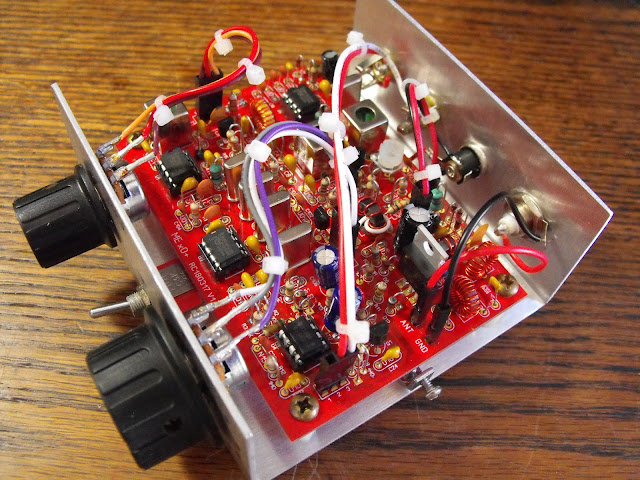 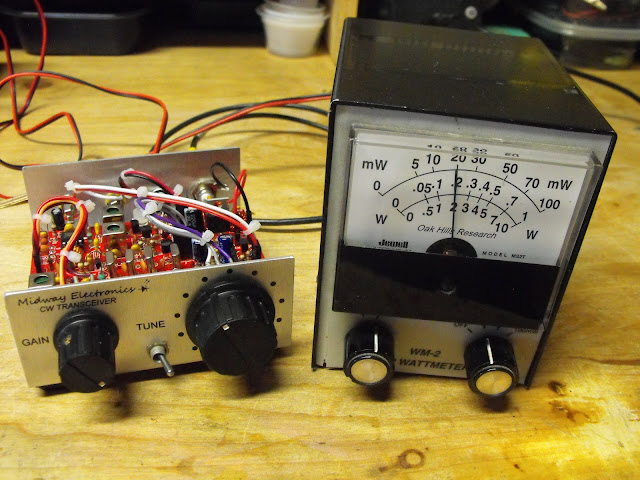 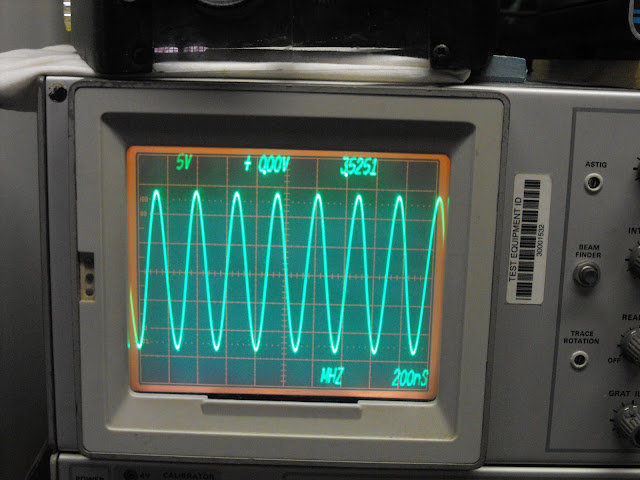 This is a fun kit that results in a serious radio that has been proven over the years and is a great starter kit for those who have graduated from the Chinese Pixies and want to get their hands on something with a little meat on its bones.